One of the highlights of a holiday at Craig is the local wildlife. We have Pine martens visiting the garden almost every night. They normally climb up on to the window sill right next to the dining room table to see what titbits have been left for them. Although the visits are often at dusk or after dark, they are also known to visit during daylight hours. 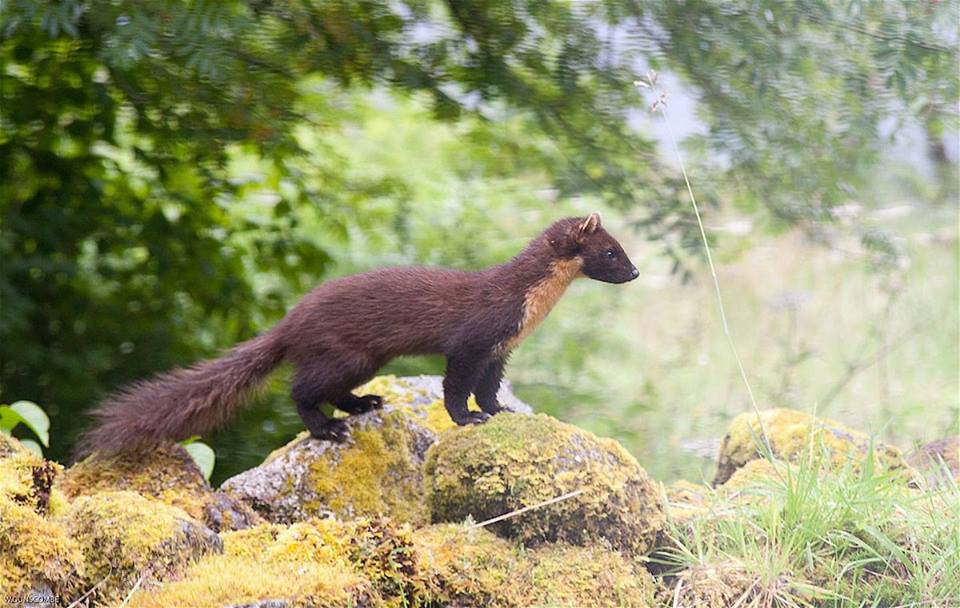 Over the last couple of years we have had a male and a female visiting separately. The female is quite wary and tends to take the food off the ledge and take it away to eat it. The male however will spend a long time up there right against the window, eating as much as he possibly can.  The only thing he seems to be wary of is the badger who often skirts through the bottom of the garden on his nightly rambles. We have also had two young martens that were coming for a couple of months in the summer, but they haven’t been seen lately so may have moved on to find their own territories.

The video was shot by Ruby, a guest staying in the cottage in 2017, using our trail camera. If you would like to borrow the camera during your stay just ask. Just behind the marten in the video, you can see the shelf on the exterior window sill of the sitting room, which is where the martens often come up to feed in the evenings.

Over the winter of 2020-21 we have also been seeing otters on an almost daily basis. They can be seen swimming along the loch from the windows of the cottage through the gaps in the trees. If you sit quietly on the shore you can get a better look.

The bird feeders in the garden are very popular with a wide range of birds including Blackbirds, Blue tits, Great tits, Coal tits, siskin, robins, and the woodpecker. There are many other species to be seen in the garden at different times including Treecreepers, Long tailed tits, Bullfinches and Wrens.

Walking along the track gives a great view of the loch and the sea birds that can be seen there, plus always keep an eye out into the woodland. We often see a golden eagle hunting over the woodland behind the cottage.  There are also Sea eagles in the area which have been seen close to the cottage.

The cottage is home to a large number of bats. I don’t know what sort but have now borrowed a bat detector so once they wake up this spring I will hopefully be able to find out! It is amazing to watch them pouring out of the small hole in the disused chimney at dusk.

The woods that surround the cottage on three sides are home to Red, Roe and Fallow deer. They can sometimes be seen crossing the open area directly behind the cottage, or met when you are out walking.

Due to the lack of light pollution, Craig is also a wonderful place for star gazing. A recent guest from the Midlands was blown away to see the Milky Way which she had never seen before.

Below is a copy of the diary left by the Northumberland Boys who visited in October 2017. This gives a real flavour for what can be seen:

It has been a wet week but we have managed to get out and about. The cottage has been extremely comfortable.

9th October. We arrived in late afternoon and had enough time to walk north towards Cadderlie. The autumn colours were superb and there was a small selection of common woodland birds: Chaffinch, Blue tit, Great tit, Coat tit, Treecreeper, Wren, Robin and Siskin. A male Pine marten appeared a number of times during the evening.

10th October. We woke to a brighter morning. The moth trap had been set under the large elm tree to the west of the cottage. The trap was a success with eight species caught: Merveille du jour (7), Green brindled crescent (3), Grey pine carpet (1), Red & green carpet, Feathered thorn (1), Autumnal moth (3), Spruce carpet (3) and Mottled umber (1). In the sunshine a migrant and common Hawker dragonflies appeared with Red admiral butterflies.

11th October. There were frequent rain showers in the morning and most of the time was spent around Craig. Birds of interest included Goldeneye (7), Raven, Buzzard and Jay.

We headed towards Glasdrum in the afternoon, stopping off at a good waxcap site. The National Nature Reserve of Glasdrum was well worth a visit. Highlight of the visit was finding Norwegian spot belly lichen – nationally important species.

The main adventure was to get to Barrs. Small parties of Redwings and Crossbills were seen along the way with a supporting cast of Meadow Pipit, Stonechat, Mistle thrush and the common woodland birds. An immature Golden eagle was seen flying along the ridge above Barrs.

Back at the cottage, a sparrowhawk and distant Golden eagle were seen before dark. The evening was very wet and the Pine marten made a brief visit.

13th October. The moth trap had been set but was a wash out. Green brindled crescent (1), Feathered thorn (1) and Mottled umber (1).